It’s official, WildStar release date is set for June 3, 2014, and as of right this moment, the NDA is lifted. There is only a few more months until you can visit planet Nexus. Pre-orders for WildStar begin on March 19th, and offer the following bonuses: 3 days head start access, access to Beta Weekends, exclusive Rocket House, exclusive Housing Trophy, In-game Storage Bag, and more!

Players can choose between Standard and Digital Deluxe Editions:

END_OF_DOCUMENT_TOKEN_TO_BE_REPLACED 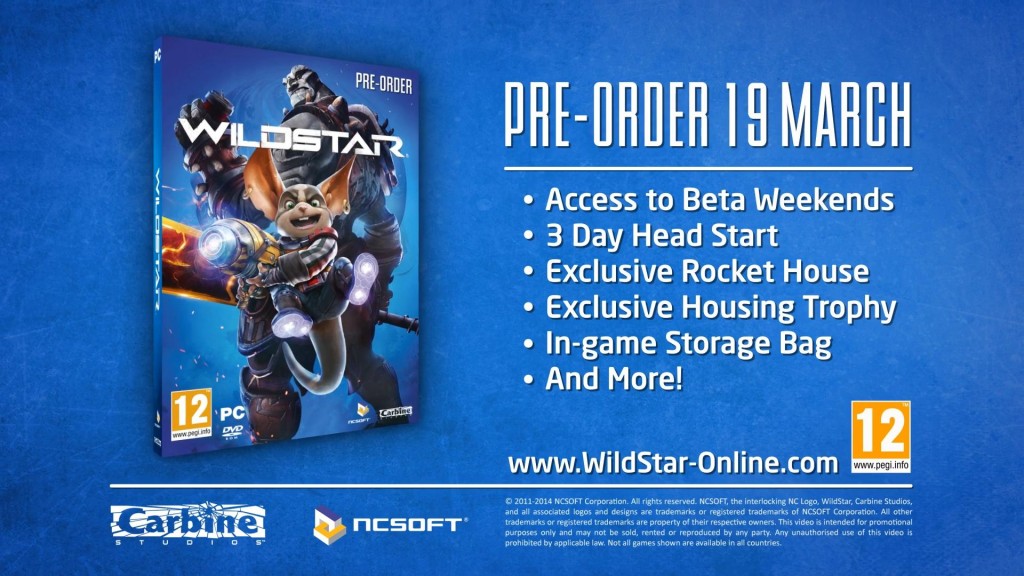 WildStar release date is most likely set for June 3rd – if we can trust unconfirmed and leaked post that you can see here. The post was removed soon after it was published, but not before Google managed to pick it up.

Additionally, the same post claims that pre-orders will start on March 19th and that it will grant the buyers three days early start. There will be other bonuses like access to all upcoming beta weekends, exclusive Rocket House, exclusive Housing Trophy, in-game storage bag and more. The post also mentions links new video on YouTube, which was, of course, quickly deleted.

And we wondered why Carbine was quiet last couple of weeks. Be it as it may, this is still unconfirmed rumor and we will have to wait for official announcement to start with celebrations.

According to CRB_Cougar, WildStar fans can expect the second wave of Stress Test beta invites for this weekend. While you’re waiting for a beta key, additional details addressing this topic unveil that this wave will be slightly larger than a previous one.

Confirmed.
This is also not the only type of key going out this week.

CRB_Cougar posted after the first wave of December beta invites the following information:

In the near term; a Winter Beta stress test wave and one more wave (slightly larger than tonight’s wave). Beyond that, plans can/will change.

I suspect you’ll start to see some partner beta keys start to show up too (don’t hold me to any timing here though, as I know we are TALKING to partners but I don’t know that we’ve finalized anything yet along these lines)

WildStar has been one of the most exciting games to follow in it’s development. The level of fan interaction, reveals, and general flair they have brought to the process has been putting other games currently in development to shame (I’m looking at you ESO). This made it strange, however, when carbine seemed to grow somewhat quiet over the past couple of months. There was still the great fan interaction, but very little new news was coming out about the game. It turns out they had a very good reason, and are planning to make up for lost time in a big way.

The team at Carbine had been hard at work over the past few months getting the game ready for its next stage of development. Now that they have reached that stage they are ready to show off all the new things they have been working on. Not only that, but the team is planning on streaming some gameplay on Twittch, which is something everyone can get excited about. And, to top it all off, they announced that the next round of beta testing will be starting in December.

You can read about all the upcoming fun after the break. If you’re as excited as we are be sure to let us know in the comments below. END_OF_DOCUMENT_TOKEN_TO_BE_REPLACED

WildStar team will be doing a housing presentation on GamesCom for visiting crowds, and we’ll be live blogging from this presentation with video coming soon after. Stay tuned! The presentation will be starting at 13:30 CET. If things go well, we’ll do the same for dungeon presentation as well.

END_OF_DOCUMENT_TOKEN_TO_BE_REPLACED

We had immense pleasure of meeting Jeremy Gaffney, Executive Producer at Carbine Studios, during GamesCom 2013 and spend some time discussing the game with him. You can expect the full interview including some community questions being answered, but in the meantime we wanted to share this short video where Mr. Gaffney showcased some of the Chua housing options and, voluntarily divulged some amazing warplot information.

WildStar’s business model has finally been revealed it’s buy-to-play, with hybrid monthly subscription. The standard box (physical or digital copy) will cost $59.99 (€44.99 / £34.99) and will include 30 days of free game time and three week-long passes for friends to try the game. You will be able to purchase WildStar both digitally and physically at all major retailors.

After buying the game Carbine offers you two options for your game time: