One of the most important features in every MMO – guilds, has standard options we’ve seen so far in other MMO games and a few new, interesting ones. In WildStar, every moment spent playing with your guildmates means a lot to you and your fellow guildies.

How to create a guild in WildStar?

Ask a guard in your capital city about Guild Services and he will show you location of a guild management NPC on the city map. Prepare 10g and bring no one but yourself when you are level 12, because that’s all you need to register your guild. And some design affinity, since you have to create your guild emblem using one background and one foreground icon, found on two long lists. If you change your mind about the look of your guild emblem, you can always change it later for a small sum of influence (more about this later). You can also change names of three starting guild ranks (leader, council and member) while creating a guild. 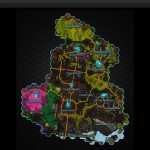