Carbine Studios just released an awesome trailer showcasing all the classes you’ll be able to play once the game launches, including the two unrevealed classes. They are Medic and Engineer! Medic will obviously be a healing class. There is a Dev Speak video released about the medic (more about that in the next news post) and they are ultra high-tech, close range, hybrid healers and damage dealers. They carry these sci-fi looking cannon-guns called Resonators into battle and I am not sure if they fry you until you are healed or heal you until you are fried. Engineer is not there to change your oil and tighten your screws (as the main character in the video trailer so regretably says). They seem to have robot pets that will take care of all your pest problems and more. They seem to be able to have all four robots active at the same time and carry a shotgun type weapon which makes them a mid-range/long-range class with pets (hunter anyone?). I am sure we will find out more about these in the next Carbine class drop, but in the meantime enjoy some screenshots from the trailer and the trailer itself. 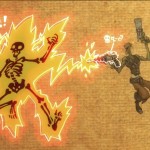 Marauders thought that Nexus will be easy pickings … 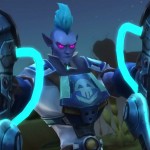 … until they met the Medic … 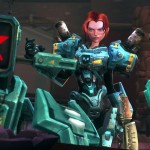 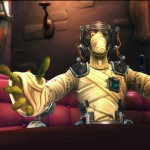 … which resulted in this new look for the marauders.